Here is a list of the most important locations that can be reached from the Casale Romano Resort.

The canyons are up to 25 metres high and 2 metres wide at the narrowest points and 4-5 metres wide at the widest points. The natural canyon, contrary to popular belief, has not been carved by water over thousands of years. The Alcantara river flows between lava stones that form its characteristic riverbed. In the territory of Motta Camastra, in the locality of Fondaco Motta, is the most imposing and famous gorge of the Alcantara, more than 6 km long and easily passable for the first 3 km. The peculiarity of this gorge is the structure of the walls, created by flows of basaltic lava (poor in silicon but rich in iron, magnesium and calcium). The lava then cooled very quickly, creating pentagonal and hexagonal prismatic shapes, reminiscent of the molecular structure of the constituent materials. 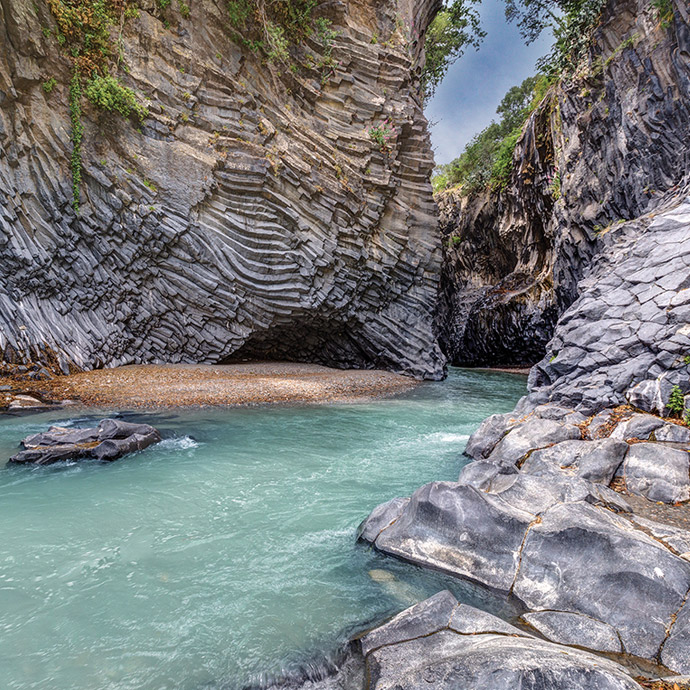 Etna rises on the east coast of Sicily, within the territory of the province of Catania and is crossed by the 15th meridian east, from which it takes its name. It occupies an area of 1265 km², with a diameter of over 40 kilometres and a base perimeter of about 135 km[7].Image of Etna and the territory in which it lies as seen from a satellite (source: NASA 2005).The volcano is classified as a stratovolcano; its height varies over time due to its eruptions, which cause it to rise or fall. 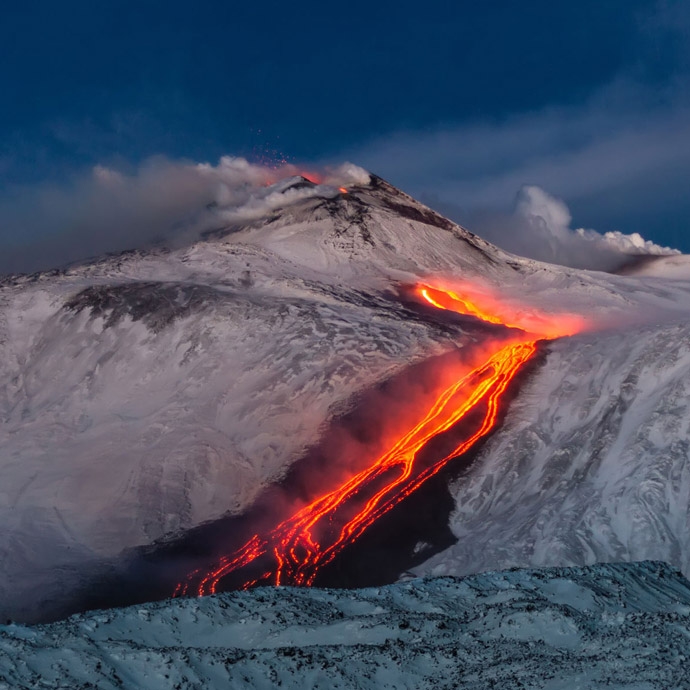 It is one of the most important international tourist centres in the Sicilian region, known for its natural landscape, marine beauty and historical monuments and was an important destination on the Grand Tour. Taormina has been a major tourist destination since the 19th century in Europe. During the 20th century, the city became a colony of expatriate artists, writers, and intellectuals; for example Albert Stopford, with his famous Edwardian garden, and D.H. Lawrence.

Thirty years later, from April 1950 to September 1951, the same villa was the home of Truman Capote, who wrote about his stay in the essay Old Fountain. In addition, Tennessee Williams, Jean Cocteau and Jean Marais visited the place. Charles Webster Leadbeater; Jiddu Krishnamurti came to live here, describing Taormina as an ideal place to develop his talents.

CATANIA (60 km. away from Casale Romano)

Catania, a city founded by the Greeks in 729 B.C., has a history rich in cultural heritage from the Greek, Roman, Byzantine, Arab, Norman, Swabian, Angevin, Aragonese and Spanish eras that you will find in its beautiful monuments. Today’s predominantly 18th-century city is the result of reconstruction after the strong earthquake of 1693, built in the Sicilian Baroque style that has been declared a Unesco World Heritage Site. Catania is truly a city to discover!

The city’s large central square, Piazza del Duomo, is characterised by the picturesque Elephant Fountain and the richly decorated Cathedral. In the south-western corner of the square, La Pescheria, the weekday fish market, is a bustling spectacle surrounded by restaurants serving seafood. 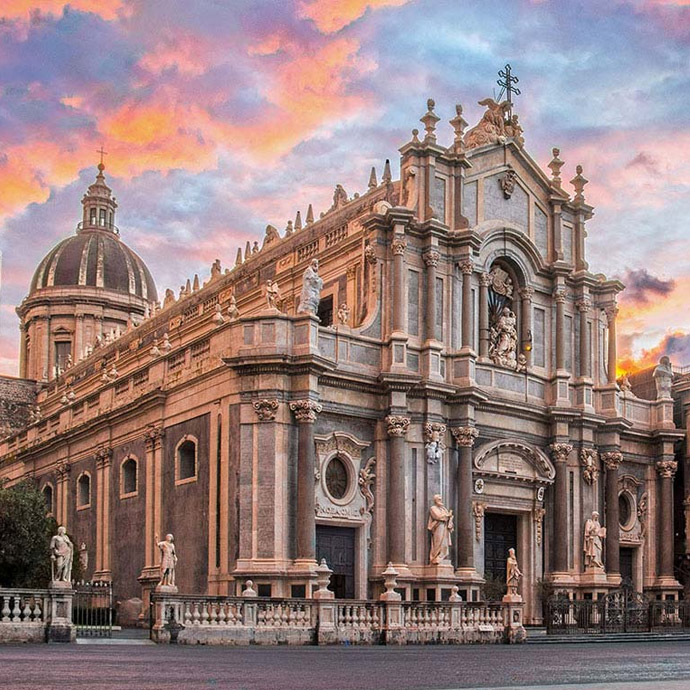 SIRCUSA (120 KM. away from Casale Romano)

Located on the south-eastern coast of the island, Syracuse has a history stretching back thousands of years: it was founded around 734-733 BC by the Corinthians. Counted among the largest metropolises of the classical age, it excelled in power and wealth with Athens, which tried in vain to subjugate it. Numerous influential personalities took it in, such as Plato, who came here three times and tried to establish the ideal state of the Republic. Home to artists, philosophers and men of science, it was the birthplace of, among others, the famous Archimedes. It was conquered by Rome in 212 BC. Cicero in the 1st century BC still described it as the ‘greatest and most beautiful Greek city’. Characterised by great historical, architectural and landscape riches, the city of Syracuse was declared a UNESCO World Heritage Site in 2005, together with the Rock Necropolis of Pantalica. 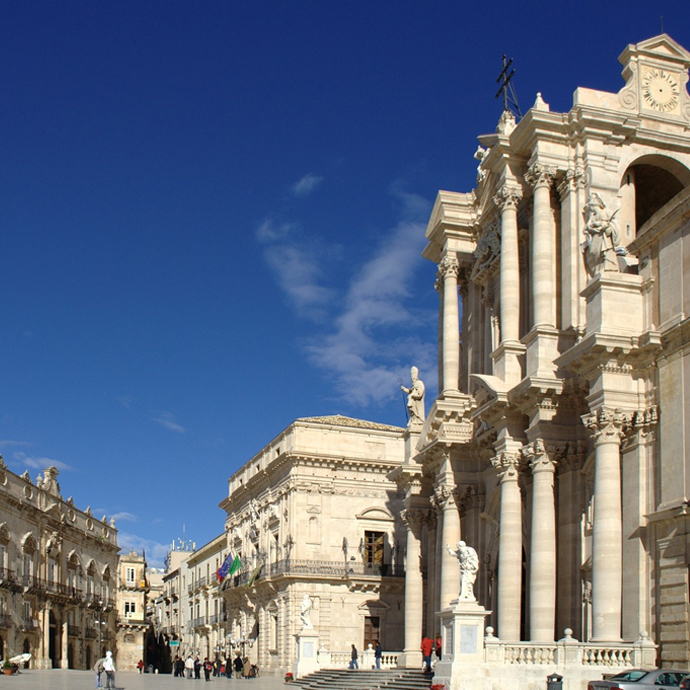 The undisputed capital of Sicilian Baroque, Noto is certainly one of the main destinations to visit during a holiday in the Val di Noto in south-eastern Sicily. Noto can be visited at any time of the year: in the summer you can combine a cultural stay with the beautiful sea of its coastline and, in the winter months, you can plan a tour of the Val di Noto towns to which you can combine a food and wine tour, tasting the typical dishes and wines of this area. This great architectural jewel synthesises all the distinctive elements that characterise the Baroque in south-eastern Sicily. In 2002, Noto was declared a UNESCO World Heritage Site, together with Modica, Palazzolo Acreide, Ragusa, Scicli, Caltagirone, Militello in Val di Catania and Catania. The city is called ‘the garden of stone’, thanks to its sumptuous palaces and monumental churches built with the richly carved local golden stone. 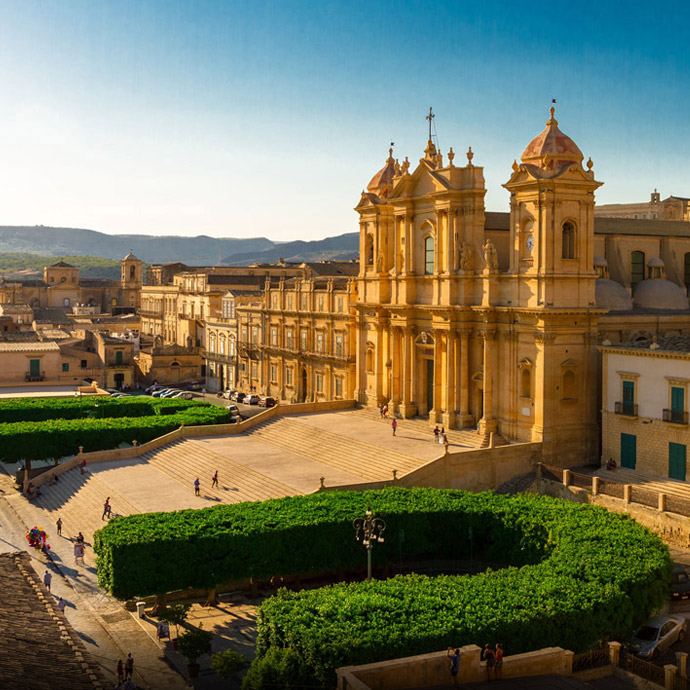